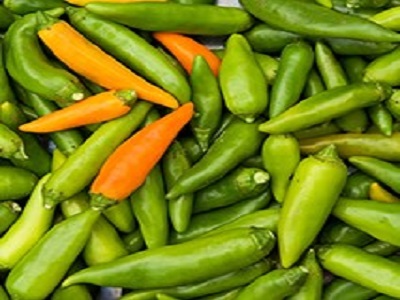 The last year saw a lot of people dig into their inner gardener. If you’re still enjoying a green thumb, July is a great month to plant peppers in Arizona. Planting now can lead to a bountiful fall harvest.
There are the classics like jalapeno or hatch chilis. Native chiltepin peppers are a great choice. They come from a shrub in shades of red-orange. These little round peppers pack a punch, coming in at 50,000-100,000 scovilles.
Or try Scotch Bonnet; they are native to Brazil and are another spicy option (100,000-350,000 scovilles) that does well in the desert.
The Scoville scale is a measurement of the pungency of chili peppers, as recorded in Scoville Heat Units, based on the concentration of capsaicinoids, among which capsaicin is the predominant component. The scale is named after its creator, American pharmacist Wilbur Scoville, whose 1912 method is known as the Scoville organoleptic test. The Scoville organoleptic test is the most practical method for estimating SHU and is a subjective assessment derived from the capsaicinoid sensitivity by people experienced with eating hot chilis.
Peppers aren’t just spicy – they can also be sweet. If that is more your speed, try lunch box peppers, a small variety that is crisp and sweet. California Wonder Peppers are among the largest peppers and are very versatile.