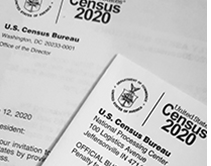 Local government officials are gearing up for this year's census count, but you may be asking yourself, "What is the Census?" or "Why is this important?".
The Census is a requirement by the U.S. Constitution, and it's critical for Arizona's future. Local government officials use the Census to determine funding and political representation over the next decade. According to Census.gov, the Census counts every person living in the United States and five U.S territories.
So, why is this important? According to AZCensus.gov, Arizona can lose up to $3,000 per year for every person not counted by the United States Census. Think about it. With a state of over 7 million people, if one-percent of Arizona's population fails to fill out the  Census form, the community may miss out on over $140 million per year. By responding to the Census, we ensure Arizona receives its fair share.
The Census also provides critical data that lawmakers, business owners, and many others use to support you and your community.
So, we miss out on a little bit of funding, what's the big deal? These funds ensure our kids have clean schools, adequate supplies, and stellar teachers. Through accurate census data, local schools can receive the necessary funding to allow our children to succeed. But it's not just our schools; it's our hospitals, fire departments, our roads - you name it. All these programs and services allow our community to thrive.
Oh! And here are just a few BIG reasons that the census affects our community:
Representation in the U.S, House of Representatives (Our state has the possibility of picking up another congressional seat).
Determines how more than $675 billion in public funds will be distributed.
Determines how much public money Arizona receives annually based on census data ($20 billion in fiscal year 2016).
Establishes funding levels for programs and services, such as emergency services, health care, and education.
This is all great information - but what can you do with it? Census day is on April 1. However, starting in mid-March census forms will be available through the mail, online, or by phone. According to the U.S. Census Bureau, the Census will extend its self-response deadline to August 14.
Learn more here to make sure Arizona can count on you: PAGRegion.com
Let's make sure our state has continued success! I'm trying my best to get this message out, and ensure our community is accounted for! I hope you participate in the Census, and please forward this email to friends, family, and colleagues so we can continue to build a truly amazing community.