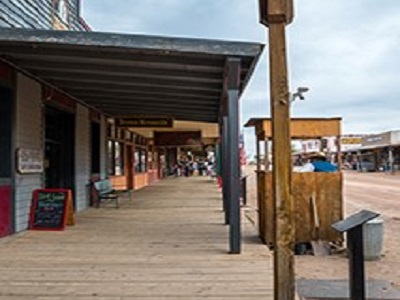 Ghost of Towns Past
Sprinkled throughout the desert are Arizona's forgotten towns, remnants of a forgotten way of life. Look into the past on a tour of these ghost towns.
Arizona is dotted with ghost towns across the desert horizon, echoes of civilization that once was, the remnants of which remain. Luckily, that means you can tour these abandoned towns and get a glimpse into what life was like way back when.
Southern Arizona
Take Gleeson as an example. 16 miles east of Tombstone, Gleeson had a population of about 500 and still shows traces of what things were like back then. One of the highlights still standing is the Gleeson Jail, which retains much of its initial structure thanks to a bit of renovation.
Fairbank features similar remnants of the past but is famous for its still-intact schoolhouse that you can visit. There are also remains of a hotel and a railroad bridge. And Ruby, one of the most preserved ghost towns in the area, has a lot of what you would expect from a mining town back in the day.
Luckily, you can see all these towns in the different ghost town tours available to you. Many focus on Tombstone, which used to be a ghost town but is now a thriving community once more. Its centralized location allows you to experience all the other ghost towns in the area.
Central Arizona
Goldfield, later known briefly as Youngsberg, was once a ghost town, but much like Tombstone, it now booms with those looking to catch a glimpse of the Wild West. This town started with the mines founded in 1892 on what was considered one of the richest bodies of ore at the time. Today, tourists can tour the mines, pan for gold, rest in the saloon, or ride on the only narrow-gauge railroad in operation.
Just 13 miles northeast is the ghost town of Tortilla Flat. Not quite deserted, the town is a shadow of its former self with only six residents – as all but a one-room schoolhouse was lost in a 1987 fire. In addition to the original schoolhouse, you can still find many foundations of former buildings in the area, as well as a rebuilt post office, motel, general store, and restaurant.